Among the characteristic streets of the Borgo di Castagnetoli, we offer Stone House of about 110 sq. mt. with Independent Entrance. Composed on the ground floor entrance hall, kitchen, large living room, bedroom and terrace with panoramic view of the river. On the first floor there is a bathroom and two bedrooms. Two Cellars on the Lower Floor. Autonomous heating.

In the heart of a quiet mountain village we… More Details

In the historic village of Santissima Annunziata, a few… More Details 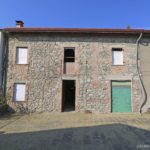