In a residential area, within walking distance of major services, we offer an apartment of about 130 square meters. located on the first floor and composed of kitchen, living room with fireplace, large hallway, three bedrooms and two bathrooms. On the ground floor characteristic vaulted cellar, with local evacuation. Exclusive garden with own garden.
House with independent heating and terracotta floors.

In the beautiful historic center of Pontremoli, located on… More Details

We propose in an easily accessible position, in the… More Details 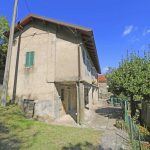