Conveniently location, we offer semi-detached stone farmhouse of about 210 square meters. to be restored. Composed on the first floor of five rooms, bathroom and large terrace overlooking the Apuan Alps. On the ground floor there are three large cellars (ideal as a tavern). Exclusive land of about 800 square meters. completely flat.

We offer this independent stone house located in a… More Details

In a quiet location, immersed in the countryside, in… More Details 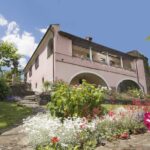