In a quite countryside location in Mulazzo, we offer Villa of about 180 square meters. in perfect living conditions. Composed on the ground floor by two large panoramic terraces overlooking the Tuscan-Emilian Apennines, the Apuan Alps and the Magra River Valley. Entrance, kitchen, living room, three bedrooms and large bathroom. In the Basement, Garage, Four Cellars and spacious Storeroom. Externally Garden Vineyard of about 990 square meters. with Two Storeroom. Autonomous heating. Internally the Villa has been restored.

In the center of Pontremoli, a few steps from… More Details 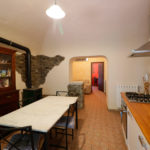