In a residential area in the center of Arpiola, we offer a habitable house with a large private terrace of about 150 square meters. with parking spaces. The house is composed on the ground floor of two cellars, in the first floor kitchen, living room, double bedroom and large bathroom. The building can be habited immediately. The furniture inside is subject to negotiation. Possibility to buy land in the immediate vicinity, about 70 meters.

Among the characteristic streets of the Borgo di Castagnetoli,… More Details

In a central position, in the beautiful Pontremoli Town,… More Details 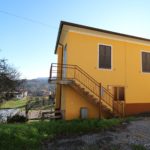